Returning from the Universe, 2019

Womangirl Walking Away from Resting Hands, 1972

Brown Sole, Half Cylinders and Dots, 1969

Malin Gallery is pleased to present an exhibition of paintings, ceramics and digital works by the New York-based artist Barbara Nessim. Stargirl will feature 14 large-scale paintings from a new series of work, The Wo/men In My Life, inspired by drawings from Nessim’s sketchbooks from the 1970s. The new paintings will be accompanied by selections from several of the artist’s other most important bodies of work stretching back to the 1960s, including work on paper, ceramics and early digital art.

Born in The Bronx in 1939, Barbara Nessim’s career as a fine artist, a commercial illustrator and a pioneering digital artist spans five decades. Nessim learned textile design at a young age from her mother, a fashion designer in the Manhattan garment industry.  In the early 1960s, Nessim was able to fund her own education at the Pratt Institute by working on the side as a fashion and textile designer.  She credits her early experience working as fashion designer as a key influence in the development of her general aesthetic sensibility - yielding a “sense of economy” in her forms and an abiding interest in the infinite potential of simple, flowing lines.  Clothing and shoes have also remained key subjects throughout Nessim’s career, particularly as they serve as indices for cultural, gender and sexual identity.

Following graduation from Pratt in 1960, Nessim embarked on the artistic project that she has  pursued without interruption for over 50 years: the daily sketchbooks which she considers her “forever books.” Aside from a number of volumes lost in a fire in 1974, Nessim’s sketchbooks remain a precise daily record of both her own life and her artistic evolutions, which she views as parallel, inseparable progressions. From the outset of this project, Nessim established a set of creative parameters or “rules” to which she has adhered for over five decades. Each book has dated beginning and end pages; unique drawings are rendered sequentially on every other page; no pages are ever removed and images cannot later be removed or altered.  Nessim described the centrality of the sketchbooks to her life and practice in 1991:

The books tell the story, they see it all, the good parts, the bad, and the ugly. Nothing escapes. Nothing edited. It’s the rule. I hold fast to the tradition that I have created. If I did it, I have to see it. Whether I like it or not, it is all part of the process. Truth. It is not always welcome. Don’t break the rule I must continue, page after page. It must have a beginning and an end. Just as I live my life.

The development of Nessim’s prototypical, sparse use of line is evident throughout Nessim’s sketchbooks. Commenting on the stunning fecundity of Nessim’s graphic line, curator David Galloway notes that “a single line is molded to achieve a maximum of expression” and an “entire figure often emerges from a single curving line.”

Socially, Nessim flourished in a proto-feminist milieu in Manhattan of the early 1960s - an era when the modern conception of feminism had not yet been seeded in the public consciousness. Nessim shared a small apartment with Gloria Steinem from 1962 to 1968 - during the publication of Steinem’s landmark “Playboy” essays and just prior to the launch of Ms. magazine. Although Nessim never considered herself an entirely orthodox feminist, gender identity, androgyny and frank treatments of sexuality were common themes in Nessim’s work from the mid-1960s onwards.  A key element of Nessim’s personal adherence to her own conception of feminism was a conviction that she needed to support herself financially as an artist from the beginning. In the late 1950s, Nessim’s interest in figuration, narrative illustration and economy of line was asynchronous with the dominant ethos of Abstract Expressionism, and she aggressively pursued work as a commercial illustrator in an era when the field was virtually closed to women. Some of her earliest commissions came from softcore titles that proliferated at the time, such as Gent, Nugget and Escapade. Ironically, Nessim found the art directors of such publications to be unconcerned with her own gender and also open to her artistic experimentation and investigation of challenging themes. As the 1960s progressed, Nessim was increasingly in demand by more mainstream publications, becoming a “pioneer of conceptual editorial illustration” whose work was particularly suited to the New Journalism of the late 1960s and 1970s. By 1967, Nessim was teaching illustration at the School of Visual Arts (SVA) in New York. She subsequently served as Chair of the Department of Illustration at Parsons School of Design for over a decade and is now recognized as one of the most influential illustrators of the late 20th century.

For her new series of paintings, The Wo/men in My Life, Nessim selected individual figurative drawings from her sketchbooks - enlarging the line drawings and refashioning the images as bold, radiantly-hued paintings. The new paintings are accompanied by a selection of pastel works from the 1970s, termed Genetic Synthesis at the time and subsequently rechristened Who We Will Be, in which Nessim created imagined portraits from an era after  sexual couplings and procreation in a diverse society effaced contemporaneous racial and ethnic categories.

Also drawn from the 1970s are a selection from Nessim’s provocative WomanGirl series. The images depict figures sparsely adorned with elements of clothing and belts, but with exposed breasts and genitals.

Nessim’s rendering of the figures’ pudenda as hairless lent a sense of ambiguity to their ages - depicting them as “somewhere between the age of child and adult…at once sexually ambiguous and iconic representations of unexplored [sexuality]” in the words of writer Anne Telford. The WomanGirl figures confront the viewer with striking immediacy and overt sexuality, yet retain a sense of aloofness or emotional remove. When the series was first exhibited at Corridor Gallery in Soho in 1973, flyers were continuously removed and public obscenity charges were threatened. With their enigmatic evocations of sexual desire, confrontation and feminine power, the WomanGirl works remain challenging for the viewer nearly fifty years later.

Stargirl also features a selection of Nessim’s Fantasy Shoe drawings from the 1960s. Women’s shoes are a recurring subject for Nessim, whose roots in fashion design later flowered in her artistic imagination as wildly exotic sartorial visions. Vibrant, robust and often anthropomorphic, the shoe drawings manage to project themes of cultural, political and sexual liberation.  “The shoe is Nessim’s sartorial object par excellence, but it is also a personal crest that channels her observations of consumption, gender, sex and power,” writes Anne Telford.  For a period in the 1970s, the luxury Italian brand Carber produced a line of shoes based on Nessim’s designs under the label Barbara for Carber. Eccentricity notwithstanding, Nessim’s shoe designs cannily embodied the zeitgeist of the age. The shoes “embraced…the aesthetic needs of her contemporary 1970s clientele, and they like-wise  emerged—as did the artist’s shoe…illustrations—from the independent mindedness, liberated sexuality, multi-cultic trends and eclectic palette of the ‘Youthquake’ era.”  In the current exhibition, Nessim reimagines the material incarnations of her fantasy shoes in a series of recent ceramic sculptures entitled Souls / Soles.

In the early 1980s, Nessim’s vigorous artistic curiosity led her to become one of the first artists of note to produce digital artworks. At a time when computers were mostly restricted to major academic and research institutions, Nessim gained access to a IPS-2 Telidon by Norpak system owned by Time Video Information Service in Manhattan. After being appointed as an artist in residence for Time, Nessim was able to access the system from 5 PM to 9 AM, when it was otherwise unoccupied. Over two years, Nessim taught herself to program using scant documentation available in manuals and a running log of her work - at a time when many lines of code to render a simple line. On the final night that she worked on the Norpak, she created an intriguing video of herself working on the Norpak entitled Face to Face, which is viewable on our gallery website or YouTube channel.

Nessim became a regular participant at the annual Special Interest Group on Computer Graphics (SIGGRAPH), which was dominated by engineers rather than visual artists. Cynthia Goodman, curator of the watershed Computers and Art exhibition, highlights Nessim’s courageousness in embracing the nascent field of digital art at that point in her career:

“At the very moment where her work as a graphic artist was achieving world-wide acclaim, [Nessim] chose to go in a challenging new direction and into a domain where she was virtually unknown.”  Throughout the 1980s and early 1990s, Nessim undertook a series of pioneering digital projects. In her landmark 1991 gallery show Random Access Memories, Nessim devised a system whereby visitors could create and print their own unique catalogues in the gallery, with over 48 million possible variations. Groundbreaking digital art curator Douglas Dodds of the London’s Victoria & Albert Museum cites Random Access Memories as the first foray into what would become the field of generative printing and book design, noting that “Random Access Memories was perhaps the first fully-realized computer-generated artist’s book to be produced interactively, with input by the intended viewer…Nessim was one of the first artists—if not the first—to bring illustration and book design into the digital age.”

In a 1986 exhibition at Shiseido Ginza Gallery in Tokyo, Nessim worked directly with the NEC corporation to utilize new technology in the gallery. While in Japan, Nessim also gained access to the first prototype of a color inkjet printer: the Jetgraphy 3000 system by Digex.  Nessim created a series of five digital works using this technology. Hand Memory (1986) was inspired by a Japanese television documentary on ancient cave paintings, in which spray paint was  used to elucidate the handprints of the cave art creators. In the resulting work, Nessim incorporates the silver handprints into a figurative portrait with an aura of radiating digital strokes - thereby evoking the span of human visual creativity from the earliest mark-making to cutting edge digital image production. Unfortunately, the paper and inks used in the three NEC works - Hand Memory, The Gift and Flowers in the Wind — are non-archival, and thus the unique prints are extremely fragile at this point. As part of Stargirl, we will be offering these three digital works in the form of unique NFTS, thus recalibrating Nessim’s position as a digital art vanguard to the present day. 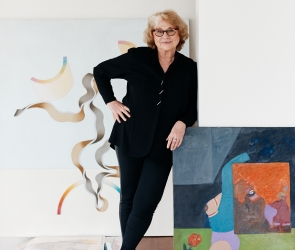 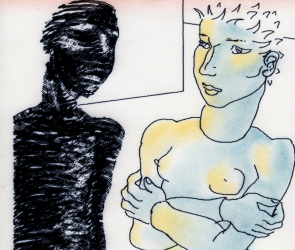